In Ghana, the fabric sector suffers from the unfair competition of Chinese counterfeits. The government desperately tries to regulate the market to save this declining industry.

We can only hear a few sounds coming from the premises of Akosombo Textiles Limited (ATL), in central Accra. Next to the entry door, the parking lot is empty. Only one gatekeeper stands next to the building. In the basement, the electricity and the air conditioning are barely working, except for one large office, down the corridor. Judith Ana Monte, an Operations Manager, works here.

A few old sewing machines are stored next to a large counter, which is not in use anymore. A small Ghanaian flag is planted on Judith Ana Monte’s desk. In November, her company was saved from bankruptcy by the public authorities. The Nana Akufo-Addo administration spent about 17 million cedis (around 2,8 million euros) to save this old, well-known symbol of the Ghanaian textile industry.

Such investment is accompanied by a reduction in taxes. For the next three years, Akosombo will not pay any value added tax, just like the other Ghanaian fabric manufacturers. Hence a loss of State resources estimated at 40 million cedis (around 6,5 million euros). The aim of this action is to make the national products more competitive.

Ghana does not want to meet the fate of Togo, which does not own any textile factory anymore. Togo’s free ports have been invaded by counterfeits, mostly coming from China. They are not subject to any charge. These products also entered the Ghanaian territory thanks to the porosity of the frontier between the two countries.

“Only three months after being made, our products are copied in the Far East. They use our signature and our designs before sending their counterfeits to our country, without paying any tax”, Judith Ana Monte says. In order to address this problem, a revenue stamp in order to make sure the fabrics are properly made is soon to be implemented.

“The counterfeits are low-grade, but they’re at least twice cheaper” Judith Ana Monte explains. “They quickly invaded the market and the local manufacturers ended up in great financial difficulty. Some factories had to close” she adds. The Ghanaian textile industry currently employs 3,000 people. It is 10 times less than it was 10 years ago. 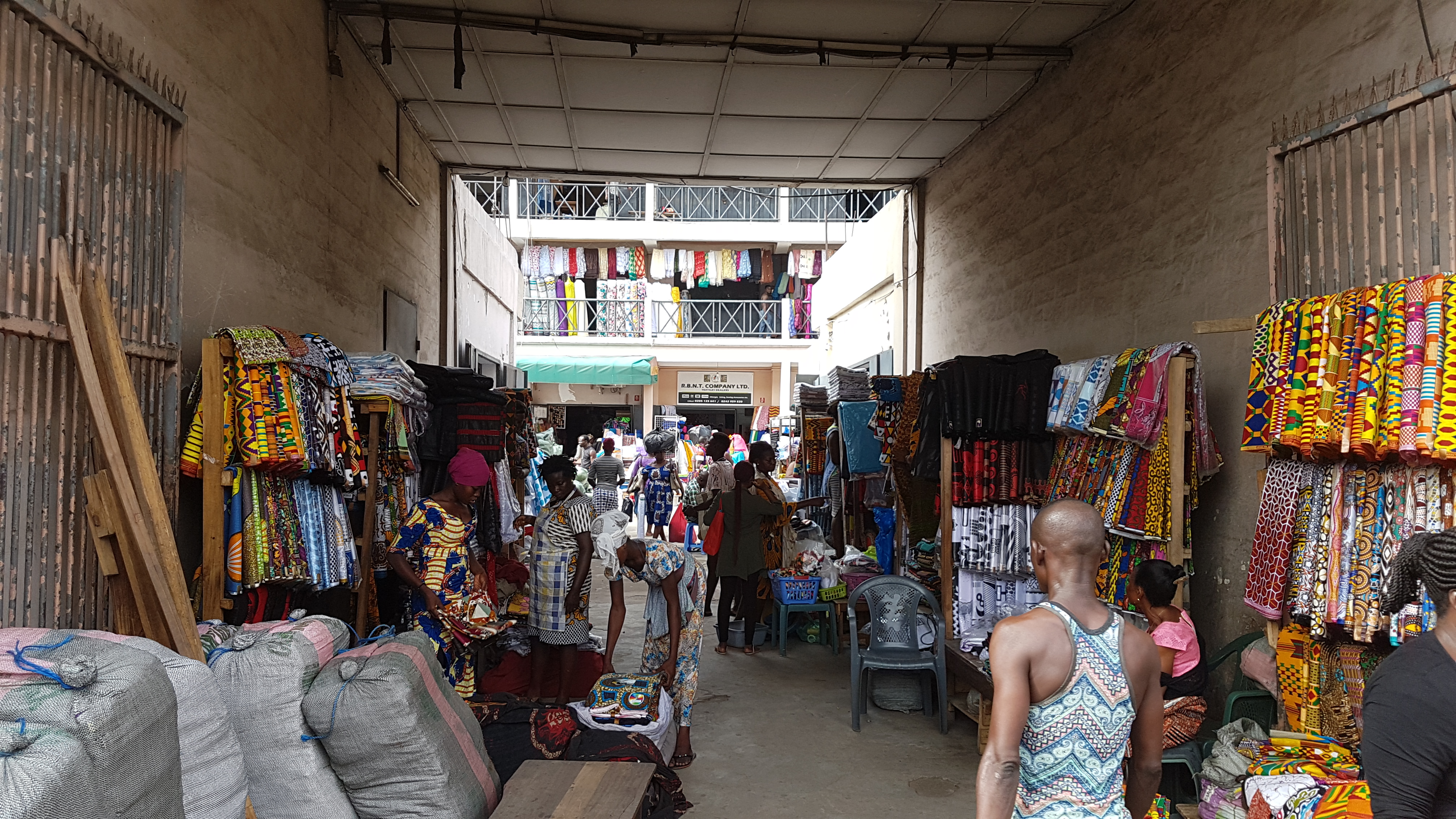 The Akosombo factory now only works upon request. Recently, a state actor entered into a contract with the company to sew uniforms. “We’re able to produce 23,000 km of textile a year. In 2018 though, we didn’t make more than 1,000” Judith Ana Monte complains.

Akosombo currently struggles to avoid dismissals. For several months now, 609 of its 780 employees have been forced to stay home, because there is no work. Besides, the production costs are much too high, and the company can barely adapt to the demand.

Things are pretty much the same in Makola, the biggest market of Accra. “The business of textile is collapsing. The local fabrics are almost twice more expensive than the counterfeits. So, people don’t come to the market as much as they used to, and many stores have to close” Nana Okraku Ohene – the vice-president of the association of Makola fabrics sellers – develops.

To survive, these shops supply themselves with foreign products, counterfeits included. “Most of the articles you’ll find here were imported. People prefer the local fabrics, but a yard costs more than 40 cedis, so they cannot afford it”, Nana Okraku Ohene says.

Some unscrupulous sellers do not hesitate to display counterfeits for the same price as the local-made fabrics. “They succeed in importing counterfeit goods, they’re totally part of the system”, fashion designer Constance Mensah regrets.

Authenticity is now a challenge

The manufacturers now tend to target the Ghanaian wealthy middle class. Like Vlisco, a company from the Netherlands, which has a very strong presence in the Gulf of Guinea. Other Ghana-made products are a little more affordable, like Ghana Textiles Print (GTP) and Woodin. These brands also suffer from the crisis, but their customer base is very loyal. “I know women who only buy these brands, they can’t wear anything else”, Constance Mensah assures.

To tackle the issue of counterfeits, Ghana Textiles Print incorporated a barcode in its fabrics. It allows the consumer to check whether they are authentic. Akosombo, for its part, rely on a transformation plan, with new machines. The company wants to catch up with its competitors, so that it can repeat the receipt of past success in the next three years.

According to Constance Mensah, for this brand, it would be useful to target a younger customer base. “Just like the other manufacturers, Akosombo must adapt its prices to fight against the products of trafficking”, she concludes.