Ghana has seen a proliferation of TV channels over the past 20 years. More jobs are now available for the young who want to do journalism or script-writing. We met a few students enrolled at the Accra Film School, which trains them to do both.

Rex-Anthony Annan, executive director of the Accra Film School: “Where technology’s going, there’s no clear distinction between journalism and directing, or journalism and script-writing.”

The Ghanaian journalism sector is now richer than ever. According to Rex-Anthony Annan, the executive director of the Accra Film School, “there are more jobs now, and in the future, there will be even more”. When he started working in television 20 years ago, there were only three TV stations in the country. Now, in Accra only, there are more than 20 stations. Rex-Anthony Annan also highlights the emergence of social media, which open new prospects for the students: while creating a source of alternative revenues, they are a good way of promoting oneself. 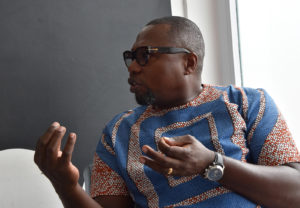 Seven years ago, Rex-Anthony Annan decided to create the Accra Film School because he realized there was “a disconnection between those who are coming from the universities and the people already working for the TV stations”. Indeed, the former do not know how to use the social media, and the latter need to learn the basic rules of journalism. But what sets his school apart is that its students also learn how to succeed in the film industry. “Now, if you are a journalist, you can easily transition to be a film director, or if you’re a film director, you can easily transition to become a journalist!” Rex-Anthony Annan explains.

At first, the school only had one student. He is now a director and bought his own studio. Every year now, the Accra Film School welcomes 25 to 40 new students. They have to pay 1.300 Cedis for a whole semester – which represents about 215 euros. “After school, they work in the various TV and radio stations across the nation. Some are news editors, some are journalists. I believe the objective of starting the school is being achieved,” Rex-Anthony Annan says.

Ama Krampah, former student and TV host: “There’s a lot of uncertainties, good or bad, but I see a great future!”

Ama Krampah, 29, works for Eclipse Broadcasting Network (EBN), a private TV station, as an announcer. But that is not her only asset: she is also an actress. “This job is a platform: when you mutualize, you can really expand your brand,” she says.

After spending two years at the Accra Film School, she was hired at Joy FM, a private radio station. Then, she joined EBN. Success was not immediate, but she now earns enough money to take care of her whole family as a single mother. “In Ghana, journalism will work for you if you’re doing it well and if the right opportunity finds you. It takes time, but once you’re set in and you do your best, it should be enough to make a living… Unless you want to drive a Lamborghini!” she laughs.

Unlike in France, there is no such thing as a small-screen star in Ghana: most of the TV hosts belong to the comfortably middle-class. Ama Krampah keeps her head up high though. In two or three years, she hopes to become more visible. “When you say Ama Krampah, you should be able to know me in your country, by God’s grace.”

Patrick Yaadar, directing teacher: “We are growing old, so we need to impact the younger generation what we have learnt.”

With a playful smile on his face, Patrick Yaadar welcomes us into the school. In the background, some of the documentaries he made are playing. He has been a director for more than 20 years now, and he started teaching at the Accra Film School this semester. He is rather proud of his students, to say the least. “They adapt. The film industry has gone through changes. It’s still going through changes now. People are not buying CDs anymore. People are going online to watch stuff,” he explains. 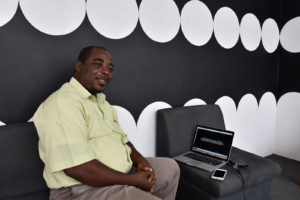 However, Patrick Yaadar warns the students who might take themselves too seriously, too quickly. “Today, it’s easier to study, you can go to YouTube. So you don’t need to go to a film school to use a camera. But for other things, you have to go to school, to practice!”, he claims.

According to him, his students will be able to make a living out of their passion, but not all of them will be as successful as they expect. They need talent, but also an important network. “So far, maybe one or two of my students have shown some promises. It depends on each individual, if you feel that good and if you’re lucky to have the right people around you…” he develops.

Jennifer Mawuena, student: “I’m not from a rich family, but the future will be great.”

She is only 20, but Jennifer Mawuena is tremendously self-confident. Last January, she enrolled in the hosting course of the Accra Film School. In a year and a half, she sees herself as a TV announcer, but also as an actress. She is convinced that these two jobs should not be separated.

That is why she chose the Accra Film School. After graduating from high-school, it took her three years to collect the sum needed. “I wanted to go to a film school that was accredited, that would got me a TV station I would work with”, she remembers. Just like her precursor Ama Krampah, she has a great potential, according to Rex-Anthony Annan: “She’s one of our best students,” he claims.

Nothing seems to stop Jennifer’s hopes and ambitions. She is already thinking of an international career. Nigeria, India, the United States… She is definitely not scared. A few days ago, she went to a casting. “They called me back. Very soon, we’ll start shooting, this July,” she smiles. Her mother, who sells fruits on a market, could not be happier.