Every day, a hundred tons of European electronic waste are burned in the Agbogbloshie landfill. Fumes of mercury, arsenic and lead darken the sky and poison the air.

Dozens of broken televisions, computers, cars and household appliances are left on the ground of Agbogbloshie’s landfill. All day long, William smashes electronic wastes, one after another. Black smokes take over the streets, and the air is literally unbreathable. Here, along the river Odow, in Southern Accra, 40,000 tons of electronic materials are stowed every year. They mostly come from Europe by boat, even though it is forbidden since the Basel Convention of 1989.

In Agbogbloshie, this waste material starts a new life. After being cut into pieces, it is charred in order to extract the precious metals. Here, William is burning car radiators in a bathtub. « We put them on the grill, then the fire does the work, » he explains. He points out at a car wreck behind him, an old Hyundai registered in Ghana. Next to it, an over-age mini-van is also waiting to be dismantled. In the bathtub, it only takes a few minutes to dislocate a radiator. William hands the metal to his friend Adam. « We fill these two big bags as we go, one with iron, the other with copper, » he explains.

Pollution 100 times above the authorized thresholds

Both are called « burners ». They are both in their twenties, and they come from the poorest region of Ghana, in the North of the country. Their clothes are black with soot, but they do not wear glasses nor masks. Only their hands are protected by old gloves. William has been breathing toxic fumes for seven years. « Before, I had a boss. I did not work in this bathtub, but on much larger braziers, he recalls. The smoke was burning my throat, so I changed my working methods. »

In the dump, they all inhale an air that is poisoned by lead, arsenic and mercury. According to statistics from the State of Global Air website of Columbia University, 15,000 people died because of these toxic particles. The Odow River and the groundwater of the capital are at record levels of contamination. In Agbogbloshie, the pollution is 100 times above the authorized thresholds. According to the American NGO Pure Earth, it is the most polluted place on the planet. 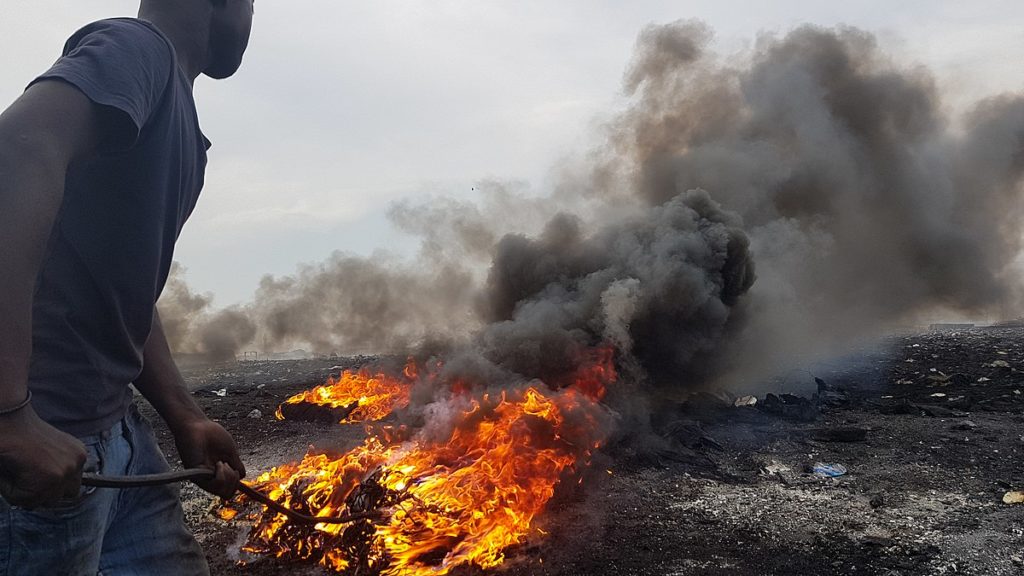 A « burner » in the landfill of Agbogbloshie – © Muntaka Chasant

Along the river, dozens of people shake bags of burning cables and take the risk of getting sick. In the slum, the locals attribute deaths to malaria, but according to the metal workers, the lure of gain is to blame. « There is no life without money. Here we do business, regardless of the conditions and consequences for our health, » Adam develops. The « burners » earn three euros for each extracted kilo of copper. The metal then enters an opaque path before ending up in the hands of Chinese, Lebanese and Indian industrial companies.

These small hands earn on average 175 Ghanaian Cedis per week – about 30 euros. This amount is ridiculous, but Adam and William do not complain. « Our life is better than it used to be, » they say. They do not really want to talk about their past though. Just like them, thousands of people in Agbogbloshie live off the e-waste market.