The government of Ghana wants to make French the second official language of the country. Its goals: developing the economic exchanges with the bordering countries and creating jobs. This is a huge challenge, since only 1 to 5% of the population know how to speak French.

« Vous voulez des mangues ? » (« Do you want mangos? ») « Tu sais faire le grand écart ? » (« Can you do the splits? ») Nine students are leaning over their notebooks. They are listening to a French lesson, trying to find out whether the sentences do correspond to [k] or [g]. « French is complicated! », Ohemaa sighs. This 20-year-old girl has been studying French since primary school. This year, she decided to enroll in the summer school programs offered by the University of Ghana.

« I’d like to become an air hostess. I want to go to France, to Canada », she explains. Next to her, Sefako, a medical student, is more concerned about her life in Ghana. « There’s a lot of French-speaking patients at the hospital » she says. But no one in the medical staff knows how to speak French. Three of the eight French-speaking countries of West Africa share a border with Ghana, like Burkina-Faso. Channel, a master student, insists: « It is essential that we can communicate with the Ivory Coast, Togo or Benin. »

Every student spent 500 Cedis – about 80 euros, two times the average wage of a Ghanaian – for a few 2-hour French lessons. « Even if they don’t always know what they will do next, the students feel that knowing how to speak French can ensure them a bright future », their lecturer, Kome Kouassi Kouaffou, points out. 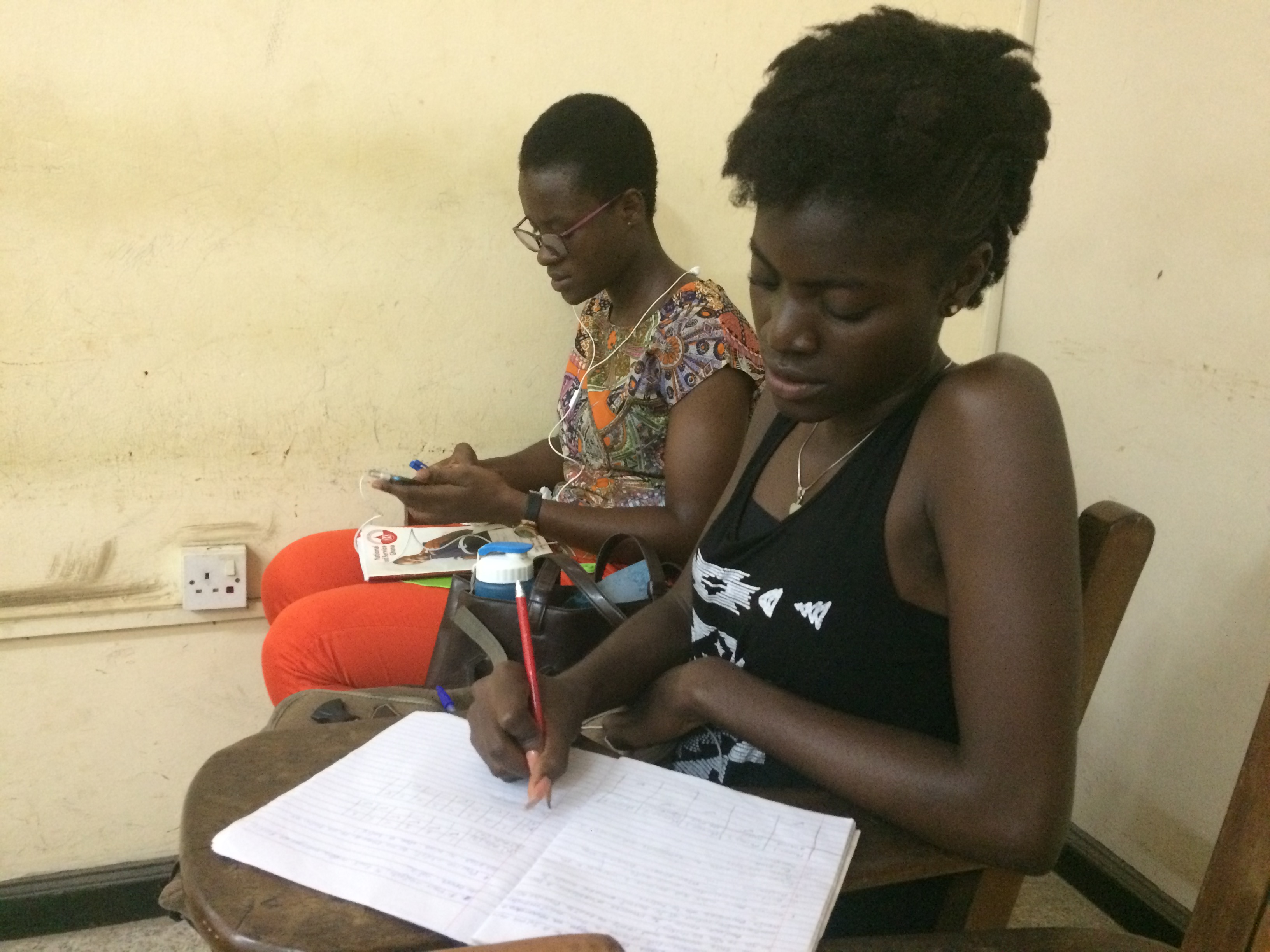 This summer, Ohemaa works on her French language 2 hours a day at the University of Ghana. © Echos du Ghana

These past few years, the number of registrations at the French department of the University has increased. Despite the high price of an annual course (about 1,000 euros), more than 500 students took first-year courses in 2018-2019. At the Alliance Française of Accra (an organization specialized in French courses), the number of students has increased by 20% within two years, despite the price (you need to spend 700 cedis, about 115 euros, for 60 hours of lessons). « Those who follow our courses want to improve their chances of finding a job », Daniel Sowah, Head of Studies of the Alliance Française, indicates. Writing that you know how to speak French on a resume allows you to access higher positions in the business world and in the Ghanaian public service.

This dynamic is encouraged by the Ghanaian government. Since his coming into office in 2017, President Nana Akuffo-Addo has been willing to make French compulsory in senior high schools. He also wants to develop the use of French in public services. Ghana is already an associate member of the IOF (International Organization of the Francophonie), but the country aims at becoming a permanent member by 2020. Because of the 2000s political crisis in the Ivory Coast, several Ivorian executives emigrated to Ghana, where they accessed key positions thanks to their mastery of both English and French. According to Foreign Affairs minister Shirley Ayorkor Botchwey, French should become Ghana’s second official language, just after English. The aim is to strengthen the cooperation with the neighboring French-speaking countries.

But opinions are divided. For star rapper Okyeame Kwame (he is a strong advocate of the Twi language), making French the second official language in the country is « disrespectful » to Ghanaian culture. In Ghana, there are indeed more than 80 dialects. « It is bad enough that our first language is another person’s language », he wrote on Twitter. On the other hand, the multi-award winning singer eShun supports this decision. She believes it can facilitate the implementation of economic and humanitarian projects in the region. To her, promoting French can also be a way to appeal artists.

Currently, only 1 to 5% of the population speaks French in Ghana. Most of the Ghanaians remember with horror their French classes in primary school. The teachers used to beat them with chalks and sticks. Even now, learning French comes down to reciting obsolete poems and passing a boring a written exam. Another problem is the clear lack of ambition of the country. « You can claim that Ghana will become a bilingual country, but if there is no budget to teach, what can we do? » Daniel Sowah, from the Alliance Française, asks. According to the Ghanaian ministry of Education, about 6,000 additional French teachers are needed in primary and secondary schools.

For Florence Vanderpuye, the President of Alumni France-Ghana, learning French needs oral practice and self-confidence. This former Ghanaian French teacher now works as a farmer. She his working on several projects with the 300 active members of her association. She goes to rural schools to convince students to learn French, and to go study in French-speaking countries. « We absolutely need to improve the quality of teacher training », she says. To her, French should not be a « language for examination », but « a true living language in Ghana ».

La fringue du Ghana, un business prometteur Previous post
The most polluted landfill in the world is in Accra Next post